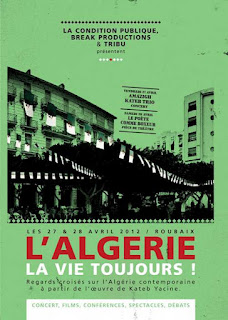 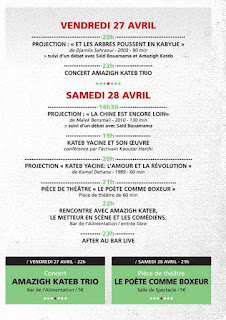 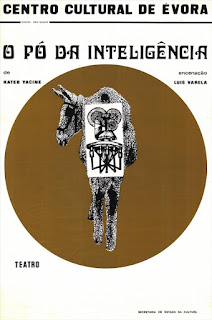 Entre a adesão e a liberdade

"In that same period, early in March 1989, Kateb Yacine discovers that he his ill. He is in France, he left Paris where he had received the major French prize the year before. His youngest son, [Amazigh Kateb] an adolescent, is with him. He no longer enjoys spending time in Paris: his friend and hostes, the most warmly devoted Jacqueline Arnaud had died the previous winter, practically collapsing in the poet's arms as she served him tea. Yacine plans to settle in Provence to write which amounts to his turning his back on the Algerian land. (...) The 1st of November '89 came: early morning, Ali Zaamound rushed off to the Algiers airport. A special plane, sent by the Algerian authorities, was bringing the body of its greatest poet home. Kateb Yacine had died on the 28th of October in Grenoble of leukemia, which had conquered him in just six months.
Strange coincidence, a first cousin of Yacine's, Mustapha Kateb (who had been the inspiration for one of the heroes of Nedjma and who was a first rate theater organizer of a sort of theater worlds apart from the work of Yacine) had died on the 29th of October in a hospital in Marseilles. So the charter was bringing back the two bodies, cousins who hadn't spoken in years. On this final journey home, a woman in mourning had traveled with the bodies: another cousin, one whose beauty and aura, as a young girl, had been the muse for Kateb Yacine's heroine, the very real Nedjma whom the poet had loved as an adolescent, his first love from which he had never truly recovered (...)."
Assia Djebar
Algerian White (1995) pp.148-149.
Publicado por antónio quadros ferro

A revolução e a poesia