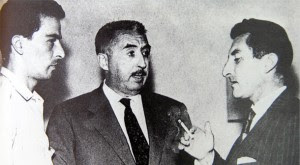 "Is Kateb [Yacine] a militant? His tumultuous relations with Alger républicain are well known. He had earned a modest living for a while by working for this Algerian Communist Party newspaper, but in opposition to its demand for unquestioning loyalty, he agressively defended the independence of the writer's mission. Ce que je refuse chez Brecht, he announced during the late 1950s (...) Kateb's own activities as a writer partially paralleled his friedships with political activists and his strong opinions, even if they are transcended by the rich complexity of an oeuvre tha inattentive readers have akk too often reductively misinterpreted as no more than the expression of its author's militancy. (...)"