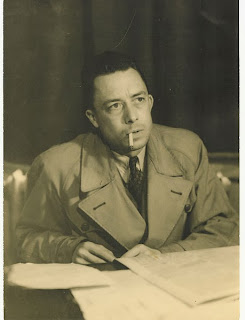 "My father, like Camus, attended the Lycée Bugeaud, where Jacques Derrida was his classmate (“I always did better than him in philosophy,” my father said), and the Faculté, where he studied law. In 1952, he departed for the United States on a Fulbright Scholarship—the list of French recipients that year shows him to be the lone student from Algeria—and thereafter he would always live in exile, in France, Australia, or North America. But surely he left home without appreciating that it would prove impossible to return. (...)
Nobody in my family ever spoke about the Algerian War. They told many stories about the 1930s and 1940s, when my father and aunt were children; but of what happened later, they were silent. In 1955, my grandfather took a position in Rabat, Morocco, and my grandparents did not live in Algeria again. In the late 1950s, when the war in Algeria was at its most fevered and vicious, my father was doing graduate work on Turkey at the Center for Middle Eastern Studies at Harvard: after his death, among his papers from that period, I found files of clippings on political upheavals in Egypt, Lebanon, Syria, Pakistan, India, Morocco, Libya, in addition to Turkey—but not one word about his homeland. My father’s lonely tears twenty-five years ago were, as far as I know, his only expression of emotion about what happened. (...)"